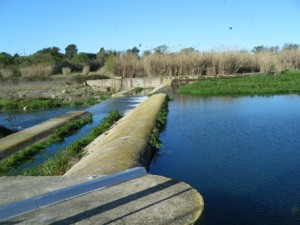 At EMATSA, we mainly receive treated water from Tarragona Water Consortium from the Ebro river. On the other hand, we have a number of alternative and strategic resources – wells, mines, etc.. – which help complete supply necessities.

General Tanks 1 and 2 belong to Sant Pere Muntanyeta and have a capacity of 12,500 m³ each. These supply water to Tarragona centre, Sant Pere and Sant Pau and the Riu Clar industrial estate.

The Bonavista tank supplies the public of Bonavista and La Canonja and has a capacity of 12,500 m³. The tank in La Mora holds 6000 m³ and supplies the developments of Mora and Mora-Rimoni. The fifth tank is in Ferran, which supplies water to the whole village and has a capacity of 50 m³. The tank in Bosques, also known as Llevant, distributes water to the Bosques, Residencial, Solimar and Entrepins area, totalling 16,000 m³ capacity. The last tank is one in the Oliva which can hold up to 4000 m³. This tank receives water from wells and Renau and from La Mina del Arquebisbe and its water is sent directly to the two general tanks in Sant Pere.

Scroll
We use cookies to ensure that we give you the best experience on our website. If you continue to use this site we will assume that you are happy with it. OkRead more